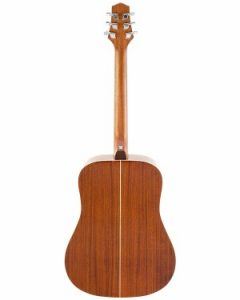 Voyage-Air is one of those brands.

They’ve been around since 2008, so they’re relatively new, but they’ve contributed to the guitar industry in a way that will change the way you see portability and compactness the next time you hit the road or the skies with a full-size dreadnought.

Before we get to the good stuff, let’s quickly go over the usual things.  The Voyage Air guitar is a 25.5″ scale guitar with a dreadnought body.  A solid spruce top and laminate mahogany back and sides make up the body.  You have a rosewood fretboard and bridge, dot inlays in pre-war-style staggered sizes, and a hand inlaid 3-ring rosette.

It sounds and looks like a traditional classic of a guitar, but there are some unique and modern designs that might floor you.  This is a foldable guitar.  What?  How?  Why?  Yes, we can hear your astonishment and concerns.

The neck on the Voyage Air Guitar has a patented hinge design with self-lubricating components that allows it to be unscrewed from the body for the neck to lie down against the soundboard.

This literally allows the guitar to be folded in half, and it fits perfectly in the supplied slim and tough Transit Bag carry case.  Will it hold tune?  Yes – well, mostly.  The nut has also been redesigned to hold the strings captive during folding and unfolding.

You may have a string or two that might come a little loose, but nothing a quick, few seconds of re-tuning wont’ fix.

This may be the beginning of a new trend, or it may be too forward of a move to be accepted by purists and the wary.  But, for the traveling guitarist, it’s a brilliant system that makes it easier to pound the pavement on the way to your next gig or stow away comfortably during flight in the skies! 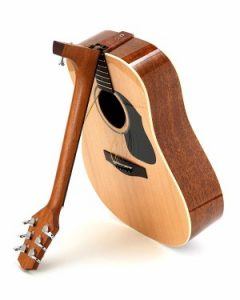 This is one of those acoustic guitars that you won’t want to buy unless the foldable feature is something you think you’ll value.  Fortunately, buyers have been smart enough about recognizing the value of this system for their needs before buying.

It works exactly as intended, and because of its convenient design, it makes it a go-to instrument since it’s so easy to take anywhere and everywhere.

However, keeping a tuner in the case is going to be a must-have unless you’re skilled at tuning by ear.  The folding mechanism will cause strings to slightly come out of tune, but not so much that it will frustrate you to never pick it up again.

It also helps that it’s a guitar that sounds great and will prove true if you’re ready to perform.

Being so unique, it’s difficult to find a guitar to compare to this one.  The primary convenience feature is obviously the folding neck for travelers.  But, you can spend less and buy a small-bodied guitar that’s ideal for hitting the road.

The Martin LX1 Little Martin and the Taylor GS Mini Mahogany would be great acoustic options for traveling.

However, if you want to plug in, you’ll have to consider acoustic electric models that may be quiet or even silent unplugged, but they will wow you away when you’re amped up.

The Traveler Pro Series or the Yamaha Silent guitar are made for just that, and they are excellent for practice sessions in private before you’re ready to plug in.

If these are still not enough you might be interested in checking out our 5 acoustic guitars less than 1000 dollars. (this guitar is one of them)

What is a Captive Nut?

The Corian nut is not your ordinary guitar nut.

Instead of strings being placed on top of the nut that guides it to the gear heads, it has precision-centered holes for strings to be threaded through for the nut to hold them ‘captive’ and in place during folding and unfolding of the neck.

This way, the strings won’t fly off the nut when using the hinged neck.

Does the Captive Nut Affect the Sound of the Guitar?

Traditionally, nut material does color the sound of a guitar, and for this reason, many nut materials are constantly debated as which is best for sound.

Voyage-Air does away with this debate by using Corian for its durable properties.  A zero-fret is used instead to compensate for the ‘lack’ of contribution from the nut.

A fret is added to the fretboard where the nut would usually lie.  This allows for string height to be the same as the other frets, and strings have to pass over the zero-fret before it’s strung through the captive nut.

Intonation is still on-point since the zero-fret is just another fret on the fingerboard so open strings sound just like fretted notes and chords.  More labor and preciseness is needed for guitars with a zero fret to ensure it’s set up correctly.

How is the Transit Bag Carried?

The included carry case is designed to be worn like a back pack.  It’s a zippered-style case with a laptop/accessories pocket to hold all your guitar accessories and essentials.

Does the Voyage-Air Songwriter Guitar come in Left-hand Models?

You can order this Voyage Air guitar in the left-hand model, however, Voyage-Air does charge an extra fee for the left-hand orientation.

Can the Foldable Guitar be Plugged into an Amp?

Primarily, it’s an acoustic-only guitar.  However, ordering from Voyage-Air allows you to add one of three pickup systems for an extra cost.

Can this Guitar be Shipped Internationally?

Many online retailers only offer shipping within the United States.  There are exporting policies and regulations that make it difficult for retailers to ship overseas.

However, Voyage-Air can offer international shipping with the appropriate costs.

Obviously, the biggest concern in purchasing this guitar is finding a case that will fit it snugly and protect it during travel while it’s folded.  Voyage-Air takes care of this by including a Transit Bag that’s purposefully made for their foldable guitars.

Since this offers the biggest cost savings, you’ll have enough cash to spare to purchase the smaller accessories you’ll need to play and improve and your skills.

Our guide to the best guitar accessories will give you the down-low on what essentials you’ll still need, or you can heed our short list right here.

Standout Features of the VAD-04 Guitar

Our Verdict on the VAD-04 Voyage Air Guitar

To strum it up, the Voyage-Air Songwriter Series VAD-04 guitar is nothing short of unique and genius.  Its primary buyers will be those who plan to travel with their guitar as it’s toted to and fro from event to event and perhaps even overseas.

Road-tripping soon?  Got a foldable guitar on you?  You just might now!