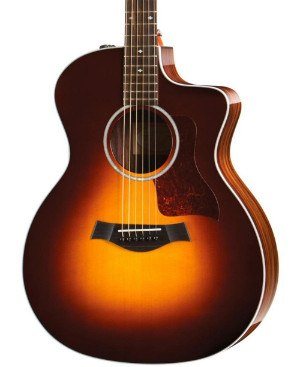 If you want aesthetic diversity, you can trust the Taylor 200 Series to give you that fix. Difficult to beat in the guitar industry, as far as popularity, is the Taylor 214ce DLX Grand Auditorium Guitar. Let’s get into the fine details to discover why the masses find it a fine instrument to own.

First off, this Taylor features the all-purpose acoustic guitar body, the Grand Auditorium. To top things off, it has a Venetian cutaway with a steep slope with soft and round edges. 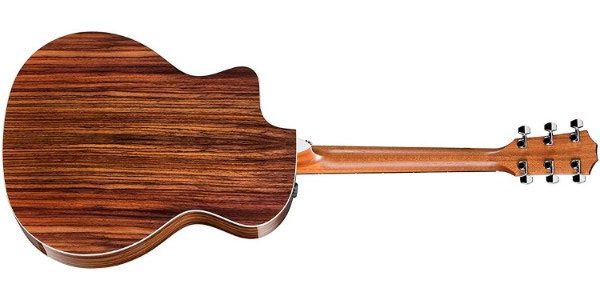 Secondly, the back is constructed of a three-layered Indian rosewood veneer. It’s topped off with a solid Sitka spruce top. It’s definitely Taylor’s go-to top tonewood, because it’s perfect for all kinds of guitar players with a variety of strumming and picking styles.

When it comes to sound, you might be surprised to find that you feel like you’re hearing a dreadnought guitar. While this Grand Auditorium is smaller than a jumbo dreadnought, the sound is crisp, strong, and definitive. Thanks to the cutaway, it’ll feel much more comfortable while sitting to allow you access to the upper register.

As an all-round guitar, it’s versatile for all sorts of playing styles. With finger-picking and flat-picking, you’ll be able to dominate those lows while achieving very satisfying and well-balanced highs.

The DLX guitar features Taylor’s Expression System 2 pickup design that’s at the edge of cutting technology. Durability is a non-issue, even with the laminated back and sides – it’s a Taylor after all. 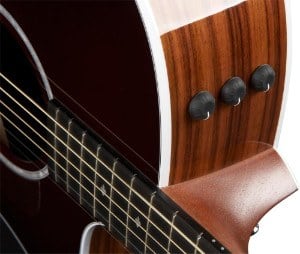 Perhaps the most common complaint among guitar shoppers is the price of a Taylor guitar. Sometimes a grand is just out of one’s price range. However, if you want the best, you’ve gotta dish out the cash for it!

When you do finally make the plunge, buyer’s report everything but complaints about the under 2000 dollar guitar. The first thing buyers appreciate about the 214ce DLX is that it arrives in pristine condition. No damage and no defective first-time buys.

Players also love that this Taylor guitar stays in tune for a long time. Its electronics are first-class for an A-class guitar. They love the cheery and bright sound with visible presence of the mids and lows. You can’t go wrong with this Taylor when you finally find it’s worth breaking the bank for!

With a budget still under 2000 dollars, you’ll definitely want to consider the Taylor 314ce Grand Auditorium Acoustic Electric Guitar. It’s a solid beauty within and without topped off with solid wood sapele back and sides and spruce top. Although it features the older Expression System pickup design, it does have the Dynamic String Sensor located beneath the fretboard extension to pickup vibrations.

But, if you wanted to consider something a little bit more expensive, this Gibson J-45 Standard Acoustic-Electric Guitar is worth window-stalking for a minute. It lacks a cutaway, but there’s some awesome features that makes playability a breeze. The action is superior to other guitars because it has a comprehensive Plek assisted setup. It also has an oil finish that preserves the wood longer than you can comprehend. It even sports some nice 2016 touches such as the LR Baggs Element VTC pickup system, engraved truss rod cover, and softened and contoured fingerboard edge – whoo whee!

Unfortunately, not everyone is going to be able to stretch their budgets to a Gibson, luckily we have a stack of more affordable guitar options that you can check out.

Are there other Finish Colors of the 214CE Deluxe Guitar?

This is the Vintage Sunburst finish, but there is also a Black and Natural finish that’s also available.

Does Taylor’s 214ce Deluxe Guitar come with a Gig Bag?

Instead of a gig bag, this Deluxe guitar comes with a Taylor hard case.

What kind of Strings does the Taylor 214CE come with?

What is the Difference Between the 214ce and the 214ce DLX?

The Deluxe model has a few differences that sets it apart from the 214ce. First off, it’s exactly the same in size and electronics. But, it has layered rosewood back and sides, Nubone Nut and Tusq Saddle instead of Tusq Nut and Micarta Saddle, and it comes with a hardshell case instead of a hard bag.

It also has a gloss body on the back instead of satin, and it has a 2-piece No Wedge backing configuration instead of a layered.

Is there a Left-Hand Version of the 214ce DLX Guitar?

Taylor does make left-hand models of their guitars at no additional cost.

How many Guitars are there in the Taylor 200 Series?

What are the Main Differences within the 200 Series Guitars?

They’re typically very similar in main components. However, the shape, tone woods, and strings will be different depending on the model that you choose.

Is there a Cheaper model of this Guitar?

If just over one grand is still too much for you, you might want to consider the Taylor 200 series 214ce guitar instead to save a few bucks which will put you under 1000 dollars.

This Taylor Deluxe guitar does come with a high quality hard shell case. The only other things you’ll need? – everything else! To get a full list of what accessories are most important, check out our “Must-Have Guitar Accessories Guide”to rank your wants and needs. For starter suggestions, here’s a brief list.

Standout Features of the 214CE DLX

Our Verdict on the Taylor 214ce DLX

To strum it up, the Taylor 214ce DLX is a really nice guitar. While this is usually the price range that an experienced player would dabble in, newbies will find themselves with a guitar that’ll last them a lifetime. It’s a strumming deal for a versatile musician!