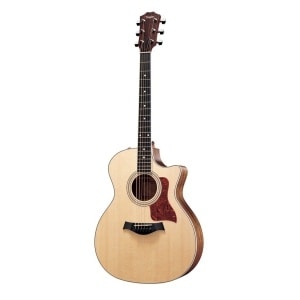 All of Taylor’s guitars are highly coveted by thru-and-true musicians! This includes the mouth-drooling Taylor Grand Auditorium 414ce guitar!

It’s set at a price just above going broke that rivals two or three mortgage payments! But, is it worth it? We dare to answer with a resounding “yes!” It wouldn’t be our top pick if it wasn’t the chief of them all!

The exquisite body is constructed with a solid wood that’s barely pronounceable – Ovangkol. To bring things into perspective for you, this West African wood is comparable to rosewood.

If you like to mix up your genres of music between a wide spectrum of highs and lows, a full mid-range, and bright trebles, the ovangkol is for you!

The Grand Auditorium shape is thanks to the founder of Taylor Guitars himself, Bob Taylor. While it looks similar to a dreadnought, it has a slimmer waist aiding its abilities for a treble zing, note definition, and ultimate playing comfort.

It’s been outfitted with the Expression System that incorporates three magnetic sensors that contributes to increased resistance to distortion and feedback, extraordinary dynamic range, and it retains the purity of high-fidelity amplified tone.

Can it get better than this? It’s certainly hard to beat!

The Taylor Grand Auditorium has more online buyers than you’d think, but it’s still not as commonly bought as a $400 guitar, and the main reason is obvious. The price tag is fair but it’s a real bummer.

However, moving from bummer feelings to strummer pleasure, this Taylor guitar is a workhorse and has even dimmed an owner’s adorations for a Martin guitar – whoa, blasphemy!

The premium and high-fidelity features of the Grand Auditorium 414ce are worthy of going into foreclosure, yet too lengthy to mention when we’re watching our word count! 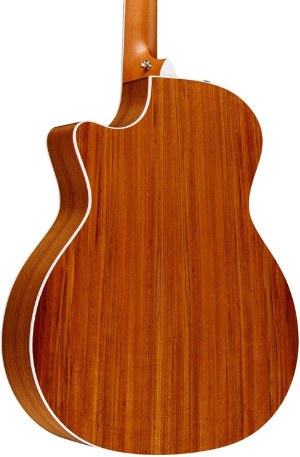 Most times, people just don’t have $2000 sitting around waiting to be spent on a luxury guitar. To be fair, that is why its steep price is listed as a drawback. However, if the Taylor Grand Auditorium is just something that you’ve always wanted to own, how about taking your expectations down just a tad for the next best thing?

The Taylor 214ce Deluxe Grand Auditorium is literally $1000 cheaper. While the 414ce does have the luxurious and exotic solid wood body, the three-layered Indian Rosewood veneer on the 214ce is still a beauty to behold.

But, you might just be fortunate enough to have two grand sitting around waiting to be spent. If so, let’s help you spend it! The Martin DCPA4R acoustic electric guitar is a beautiful instrument that will win you over, even over guitars more than twice its price.

It has a solid rosewood body with a solid Sitka spruce top. It’s cheaper than the Taylor 414ce, but it’s still quite pricey for what some can arguably say an “entry-level” Martin guitar. Entry-level or not, we can’t complain about it – it’s a Martin!

If these stunning guitars just aren’t in your price range, you will be happy to know that you still have some fantastic options. Check out this lineup of acoustic-electric guitars – you will find something you can work into your budget there.

Is the Neck Adjustable?

Thanks to Taylor’s patented New Technology (NT) neck, it is! In Taylor’s search for a straighter and stable neck that’s resistant to factors like humidity, they created their own advanced tech to get the job done.

Is there a Cheaper Grand Auditorium Taylor Guitar?

If the gut-wrenching price tag is still not a justification to your spouse to splurge on this chef d’oeuvre, then consider the excellent new to 2017 Taylor 100 Series 2017 114e Rosewood Grand Auditorium Acoustic-Electric Guitar!

Just a babe in its prime, it has everything you could ever want in it without the tripe zero digits.

Is there a Taylor Guitar for Beginners?

If the previously mentioned Taylor guitars are still pushing past your budget, the Big Baby Taylor is where the pushing stops. It’s highly rated, beyond popular, and – it’s a Taylor!

Does the Grand Auditorium Guitar Come with a Case?

Yes! Only a hard shell case would be acceptable shipping standards when you’re spending money like this.

What are the Other Tonewoods Used on this Taylor Guitar?

It features a solid Sitka spruce top, ovangkol back and sides, mahogany neck, and ebony fretboard and bridge. It also has a tusq nut and saddle and chrome plated tuners.

What are some of the Other Features of the 414ce Guitar?

Other than the features that we’ve already mentioned, it also styles the Venetian cutaway and an adjustable truss rod. It’s been strung with Elixir Light Gauge and the strings have been treated with NANOWEB Coating.

The Taylor Grand Auditorium doesn’t arrive bare skin and bones, you also get an included hard shell case in the buy. Good thing too, because you want to know that your investment is protected during transit to your house!

However, you’ll still have to get all of the other good stuff needed to get plugged in. For a full rundown, check out our in depth guide of quality accessories for your guitar 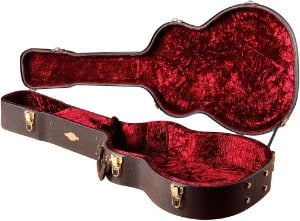 Standout Features of the 414CE Guitar

Our Verdict on the Taylor 414CE

To strum it up, the Taylor 414ce Grand Auditorium acoustic electric guitar is for serious players with some serious, spare cash. It exudes quality in everything from its solid wood construction to its sound performance and state-of-the-art electronics.

It might just be the crowning piece to your collection!